*Please note that the first reading was taken  from the previous Sunday (Ruth 1:1-18, Proper 26B) in which we used the All Saints' Day readings in place of the lessons assigned for that Sunday. 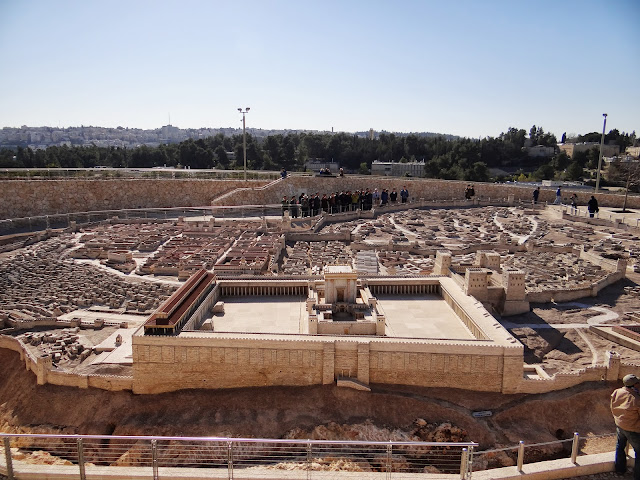 We all live in the city of Jerusalem. We only know sections of it, and it changes throughout time. The people that lived in those sections that we were supposed to ignore were still citizens of the city. We all dwell in this mystical city of God, there are some walls that our current vision can’t see past, but all the saints dwell together. There is a wonderful quote about death that says “death is a horizon, and a horizon is nothing save the limits of our sight.” So we pray for the dead, and all of the saints, because we trust that we are citizens of the realized new Jerusalem, even if we aren’t able to peer through the walls and see them.
And this brings us to the final consideration this All Saints’ Day- death. Our culture has a very unhealthy and uncomfortable view of death. We fear death as some unknown force, we fear fading into oblivion, we see death as being unnatural. But as I’ve just mentioned, death is simply moving from one part of the new Jerusalem to another. Jesus’ interaction with Lazarus is helpful.
It reminds us of the proper place of grief when we encounter death. Jesus wept and “was greatly disturbed in spirit and deeply moved.” Jesus experienced a tough loss, and he was grieved. Even if he knew that Lazarus simply had moved to a new zip code in the new Jerusalem, it meant that the nature of their relationship had changed. But he didn’t wallow in his grief. He didn’t let the death of his beloved friend define him.
Today is a day for us to remember those listed in our bulletins, our friends, family, and parishioners who have died in the last year. Today we remember those who have their names inscribed in our hearts. We grieve the loss of our physical relationship with them. We acknowledge the pain of loss, but we are invited to know that Jesus unbinds us and resurrects us, just as he did for Lazaurs.
One theologian suggests that, using the metaphor of childbirth, that faith is not an epidural, though people too often to try to use it as one. Phrases such as “this was part of God’s plan,” or “it’s wrong to be sad at death because it is joyous that they are with God,” or “the pain will go away with time” are not only wrong, but they are unhelpful. Faith is not an epidural, nor should it be. Faith instead is more similar to a midwife, who helps with the birthing of new life. There should be pain, and there should be Resurrection in our faith. Faith helps us to see that rich feast that is mentioned in our Isaiah passage.
As I’ve said before, what God gives us is maximum support with minimum protection. We will not be spared from death and grief in our lives, but we will be upheld by God and the fellowship of all the saints. We will be strengthened to have death bring about new life to us, as it happened to Lazarus. Jesus comes to Lazarus and says “Lazarus, come out!” God will come to us upon our deaths and call us by name, and will say to us, “come out!” Come out of the chains of death and grief, come dwell with me in the new Jerusalem that has been prepared for you. Come live with all the saints, past, present, and future.
Death is a tough subject, because it hurts to have loss. But we trust that though death hurts, it can be redeemed. Our funeral office begins “I am Resurrection and I am Life, says the Lord. Whoever has faith in me shall have life, even though he die.” So today as we remember our loved ones who have died, we grieve their loss, while still knowing that death will not have the final say; trusting that they dwell with God, just as we do.
May God bless us this All Saints’ Day, helping us to faithfully wear our halos and see the sainthood of all those whom we encounter. May God strengthen the bonds of our fellowship, that we might continue in the work of those saints who have come before us and leave a solid foundation for those who will seek to further build God’s Kingdom after us. And may God be the midwife in our deaths, helping us to bear the pain of grief and death so that new life might emerge in us. You are the saints of the Church. May God bless us as we live the words “For the saints of God are just folk like me, and I mean to be one too.” Amen.

The Gospel in Seven Words

Christian Century's cover article a few issues ago was entitled "The Gospel in Seven Words." It's a great idea- state the message of the faith in seven words. Doing so forces us to not worry about doctrinal fights, frees us from having to write a thesis, and encourages us to deeply consider our faith and what the Good News is to us. I am reminded of the words of St. Peter "Always be ready to make your defense to anyone who demands from you an accounting for the hope that is in you" (1 Peter 3:15). I'll share a few of the responses from the article, add a few of my own, but I'd really like to hear from you, dear reader.

"In Christ, God's yes defeats our no." -Beverly Roberts Gaventa
"Love your neighbor as yourself." -Bill McKibben
"God gets the last word." -Martin Copenhaver
"God was born. We can be reborn." -Carol Howard Merritt

And a few of mine:

"The Kingdom of God is among you." -This is a quote of Luke 17:21 and really unpins my whole theology. The Kingdom isn't about the afterlife, God's graces aren't reserved for the death, but this life we live is the place to thrive and flourish in God's love and opportunity. It is also a reminder that we have work to do, namely building up that Kingdom so that it might come on Earth as it is in Heaven.

"The LORD is Risen! Alleluia!" -This is a familiar victory of Easter morning. YHWH (Yahweh, or God's personal name given to Moses in Exodus 3 is often translated as LORD, which is YHWH in Hebrew) was incarnate in the person of Jesus of Nazareth and overcame the oppression systems of the day, including death. The shout "alleluia" reminds us to "praise God" for this and all the blessings of life.

"God loves- so love God, neighbor, self." -The foundation of all is God's love, and we respond to that love by loving God through prayer, adoration, and service. That love extends to our neighbors, including all of Creation, and stems from our knowledge that we are the beloved of God.

"God is loving, creating, forgiving, building, present." -This is a sort of combination of the previous statements. God loves. God created, and continually creates new opportunities for grace. God forgives us in our shortcomings. God is building us and the Kingdom. And God is Emmanuel (God with us);ever present.

How would you put the Gospel into seven words?
Posted by Robert Black at 1:25 PM