In the name of God – Father, Son, and Holy Spirit. Amen.
Have you ever had a mountaintop experience? You know, those events that somehow seem to be more real than ordinary reality? A moment where life doesn’t seem to be big enough to hold the experience? A few years ago I had the privilege of going to Israel; standing in the places where Jesus taught, died, and rose again were mountaintop experiences. The birth of our daughters were similar experiences. Perhaps you’ve had that sort of experience, too? Maybe when you saw a particular painting in the Louvre, maybe when saw the Grand Canyon out of an airplane window, maybe when attended Evensong, maybe when you fell in love? Mountaintop experiences are holy and memorable because they awaken us to the beauty, depth, and grandeur of life that we ordinarily overlook.
Read more »
Posted by Robert Black at 11:30 AM No comments: 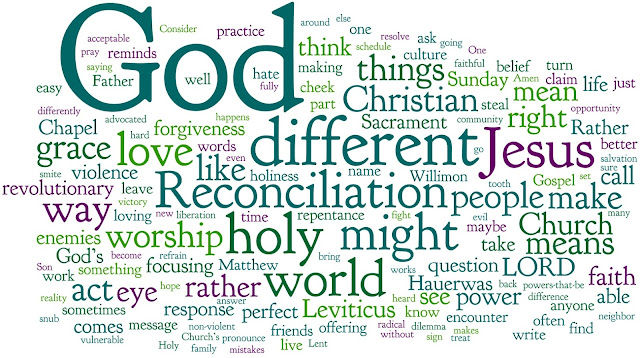 In the name of God – Father, Son, and Holy Spirit. Amen.
What does it mean to be a Christian? That, I realize, is a big question. But it seems that we who gather on a Sunday morning in the name of God ought to be able to answer that question. I suppose the simplest answer is “Being a Christian means believing in the triune God – Father, Son, and Holy Spirit.” But then we might ask, “what does it mean to believe,” and we’re right back where we started – struggling to articulate what our faith is all about. Both our readings from Leviticus and Matthew offer some insight into how we might coherently understand our faith and what it means to be Christian.
Read more »
Posted by Robert Black at 11:30 AM No comments:

In the name of God – Father, Son, and Holy Spirit. Amen.
So you’re walking down the street and you see a $20 bill on the ground. No one else is around, so you pick it up and give it to a charity. Then you go into a store, and see the cash register unattended, so you take a $20 bill and also give it to charity. Most of us would say that the first action is completely fine, whereas the second one is morally suspect, if not criminal. The action, taking a $20 bill that isn’t yours and giving it to charity, is identical. What changed was the context, and that context makes all the difference. This is a sermon on ethics and morality, and as evidenced by that simple example, it can be a complicated matter.

In the name of God – Father, Son, and Holy Spirit. Amen.
“You shall be called the repairer of the breach, the restorer of streets to live in.” Isaiah conveys the message that God intends to restore the people to the peace and righteousness that they are destined for. And furthermore, God intends that it is our godly behavior that will bring this about. Would that we be deserving of such a title – repairers of the breach.

Posted by Robert Black at 11:30 AM No comments: