In the name of God: Father, Son, and Holy Spirit. Amen.
“If you died today, do you know where you’d spend eternity?” There’s a billboard in rural North Carolina that I’ve passed several times through the years that asks just that question. If you haven’t seen that exact billboard, I’m sure you’ve seen one like it. I wonder how that phrase makes you feel? It saddens me to have the love of God so misrepresented, it angers me to have the Gospel reduced to such certainty, it frustrates me to have faith be more about what happens after death than what happens during life, it makes me uncomfortable to be in the judgment rather than the faith business. And yet, after hearing our gospel text from Luke about Lazarus and the rich man, we might find ourselves wondering about that very question. Will we be spending time with Lazarus or the rich man?
Read more »
Posted by Robert Black at 11:30 AM 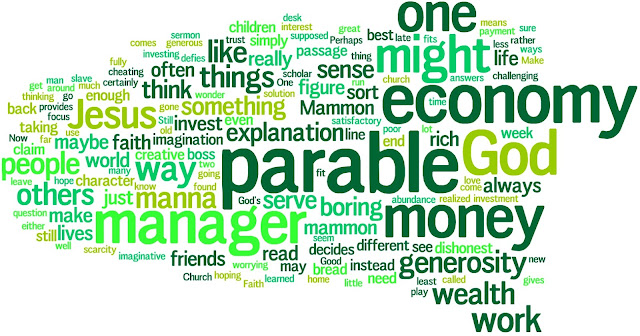 Almighty God, may you guide us to seek the Truth: come whence it may, cost what it will, lead where it might. Amen.
To say that was a challenging parable is an understatement. Lest you think that you just need to reread it a few times and it will make more sense, I’ve been doing that all week and it’s still an enigma. When I read commentaries on the passage this week, I noticed that they all seemed to spend more pages on this parable than other Biblical passages, sort of the way when you don’t have an answer you just stammer on, hoping that something might eventually make sense. One scholar even called this the “problem child of parables.” For one, the explanation that is offered by Jesus after the parable doesn’t seem to line up properly with the parable itself.
Read more »
Posted by Robert Black at 11:30 AM

In the name of God – Father, Son, and Holy Spirit. Amen.
One of the challenging aspects in preaching is that we often only get a handful of verses read from each book or letter in the Bible on a Sunday. Often, we miss the larger context of the writing when we only focus in on a small section of it. Today though is different, as our second reading is the entire letter of Paul to Philemon. So let’s take this opportunity to consider a full book of the Bible.
Read more »
Posted by Robert Black at 11:30 AM