Almighty God, may you guide us to seek your Truth – come whence it may, cost what it will, lead where it might. Amen.
It’s hard to believe that we’re more than halfway through the season of Lent already. The focus of the sermons in Lent has been on disrupting the religious routinism that it is so easy to fall into. Religious routinism is about treating our faith as, well, routine: something done without much thought or passion. Things that are routine are dull, predictable, and monotonous – words that should never describe the vibrancy that faith is supposed to be about. But because our lives are so full and busy and because our world is so complex, sometimes we slip into routinism because that’s all we can manage. This Lent, we have considered some ways to break out of routinism – by committing to wakefulness, interconnectedness, mightiness, and today we will consider the commitment to humbleness.
Read more »
Posted by Robert Black at 11:30 AM No comments:

Email ThisBlogThis!Share to TwitterShare to FacebookShare to Pinterest
Labels: humility

Almighty God, guide us to seek your Truth: come whence it may, cost what it will, lead where it might. Amen.
“Is the Lord among us or not?” That is the question that stands behind both our readings from Exodus and John this morning. Is the Lord among us or not? That question will also serve as an entry to considering our third commitment in breaking out of religious routinism in this season of Lent.
Read more »
Posted by Robert Black at 11:30 AM No comments: 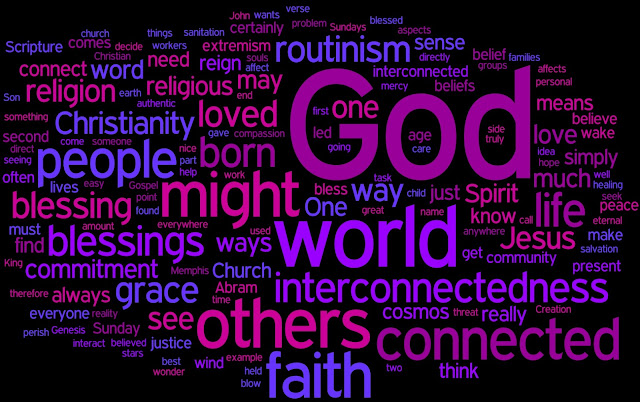 Almighty God, may you guide us to seek your Truth – come whence it may, cost what it will, lead where it might. Amen.
You’ll recall that last Sunday, I laid out a sermon series for the five Sundays in Lent. The premise is that there are two poles to religious belief. On one end of the spectrum is religious extremism, where beliefs are held that are too extreme for the religion to handle. Violence and murder done in the name of God are examples of religious extremism. When you apply certain beliefs too extremely, being closed off to compassion, diversity, or reason, what you end up with is a distortion of religion that is problematic. On the other side of religious belief is a problem that has infected much of Western Christianity: routinism. In routinism, religion doesn’t affect the way you see the world, the way you see yourself, or the way you interact with others. Religious routinism is devoid of any meaning, substance, or vigor. And routinism is just as much a fatal flaw to religion as extremism is.
Read more »
Posted by Robert Black at 11:30 AM No comments: 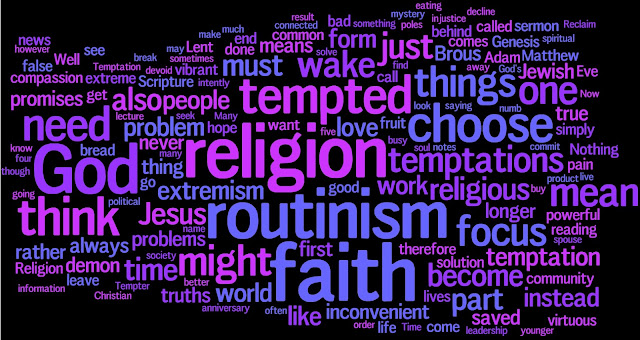 
Almighty God, guide us to seek your Truth: come whence it may, cost what it will, lead where it might. Amen.
Over the five Sundays of this Lenten season, the sermons will all have a common theme. Each sermon will stand as an independent reflection, but there will be a common thread that ties them all together. Traditionally, Lent is a season of focus – we focus more intently on God through prayer and reading Scripture, we focus more on making changes to benefit our soul, we focus on what matters most. Many of us would say that our faith, that God, that our Church is one of the most important things in our lives. And that is a truly wonderful thing, it’s a blessing to serve a church where people put faith first in their lives. The invitation of Lent is to go deeper into that common priority.
Read more »
Posted by Robert Black at 11:30 AM No comments:

In the name of God – Father, Son, and Holy Spirit. Amen.
“You are dust, and to dust you shall return.” Those are the words with which I will impose ashes on your foreheads in just a few moments. That’s an inconvenient truth one if I’ve ever heard one. And yet, outside of Christmas and Easter, Ash Wednesday is typically one of the most well attended days in the Church year. People who don’t regularly come on Sundays come out to have a priest put a cross of ashes on their forehead and remind them that they are dust. How is this Gospel? How is this Good News? Or is it?

Read more »
Posted by Robert Black at 8:00 PM No comments: