Come, Holy Ghost, our souls inspire and lighten us with thy celestial fire. Amen.
Today is a once in every half a millennium occurrence. As you’ve likely heard, October 31 will be the 500th anniversary of Protestant Reformation. Martin Luther published, though most scholars agree that he did not nail to the door, his 95 Theses against abuses of the Roman Catholic Church. And thus began a period of reformation in the Church. Ten years later, when Henry VIII requested that Pope Clement VII grant him an annulment of his marriage to Catherine of Aragon the seeds were sown for the English Reformation, which was a distinct and separate reformation than the one initiated by Luther. So Anglicans have always had a complicated relationship with the Reformation.
Read more »
Posted by Robert Black at 11:30 AM

In the name of God ☩ Father, Son, and Holy Spirit. Amen.
Here in the United States, we have a complicated history with paying taxes. Taxes really were at the core of what led this nation to declare independence from England. The Stamp Act of 1765 and the Boston Tea Party are but two examples of the ways in which taxation led to the American Revolution. After all, “taxation without representation” was the rallying cry in the colonies. Though most of us want to have good roads and schools and want social services to be provided to those in need, far fewer of us actually enjoy paying taxes. There’s the issue of not always supporting every cause our tax dollars are spent on. We have loopholes that some people use to pay less than what most people would call their “fair share,” and with tax reform on the Congressional docket, the questions of what is necessary and what is just will be a topic of public discourse. And our current tax code is about 3,000 pages long. Yes, in every way, taxes are a complicated issue.
Read more »
Posted by Robert Black at 11:30 AM 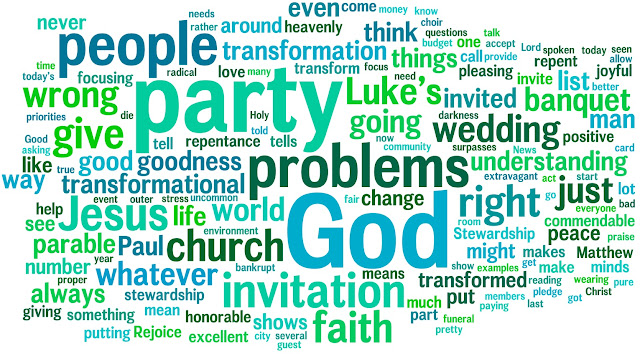 
In the name of God ☩  Father, Son, and Holy Spirit. Amen.
What’s wrong in Salisbury? What’s wrong with politics? What’s wrong with education, or healthcare, or the church? There is no shortage of articles and opinions out there on those questions. It’s easy to come up with a list of all the problems in the world. I won’t list any examples, but I’m sure you all could help me in coming up with a pretty comprehensive list. Whether it’s casual conversation with friends, the news, or even sermons – so often we talk about all the things that are wrong.
Read more »
Posted by Robert Black at 11:30 AM

In the name of God ☩ Father, Son, and Holy Spirit. Amen.
God has a great plan for your life. That’s the gist of the modern-day heresy known as the “prosperity gospel.” You can find many books on the topic in the Christian “self-help” section of bookstores or you can watch this message preached on television. The claim goes something like this: God will bless you with health and wealth if you have faith and give money to the church. This is a heresy because it confuses humans for God and makes grace something that is earned. So if the phrase “God has a great plan for your life” makes you uneasy, that’s a good thing. But we can’t get around the fact that it’s true – God does have a great plan for your life.
Read more »
Posted by Robert Black at 11:30 AM


In the name of God ☩ Father, Son, and Holy Spirit. Amen.
“By what authority are you doing things?” In other words, “Who do you think you are?” It’s a question that we train our children to ask. Math teachers tell students to “show your work” and when you get to high school or college, any paper you turn in had better have footnotes that cite your sources. When you walk into my office, right on the wall I have my diplomas and ordination certificates, so you know by what authority I am doing these things. And the same is probably true when you go visit your doctor, financial planner, or lawyer – their credentials are front and center so that you can put your mind at ease that they have the authority to be doing these things.
Read more »
Posted by Robert Black at 11:30 AM